>  Blog  >  Motivation   >   Father of Economics | Amazing things to learn about this gem! 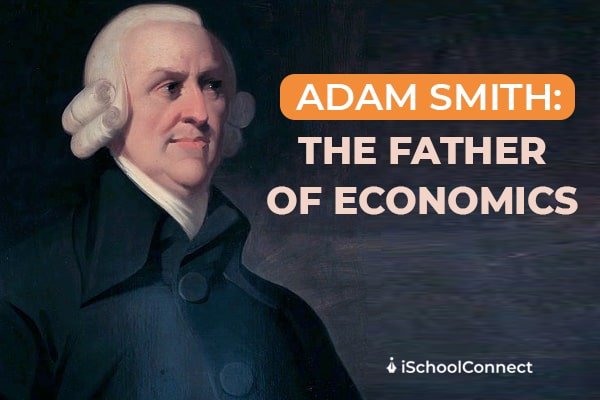 Father of Economics | Amazing things to learn about this gem!

If you are an economics enthusiast, then you must have heard about the Father of Economics. Yes, we are here to talk about the life and work of Adam Smith, a towering figure in economic theory and a pioneering political economist. Keep scrolling!

Adam Smith – attributed to being the Father of Economics or the Father of Capitalism, was a Scottish philosopher, economist, and author of the groundbreaking treatise, The Wealth of Nations.

Keep scrolling to know more about this stalwart and the concepts developed by him to help the world economies.

Adam Smith- The Father of Economics!

Adam Smith was inclined towards scholastic ambitions from a young age. He was one of the few people who got a scholarship by Scot John Snell. He contributed to the genesis of important concepts of economics that help evaluate the economy of any nation even today. These include concepts such as the gross domestic product (GDP), free-market economy, and the theory of compensating differential.

Adam Smith was born to Margaret Douglas and Adam Smith in 1720 but was left fatherless even before he was born. His father wore various hats, from being an advocate, a writer to the comptroller of customs in Fife. Adam’s mother brought him up and encouraged him to follow his ambitions of becoming a scholar.

Adam Smith had an impressive academic profile throughout his life. He went to the best secondary school in Scotland, Burgh School of Kirkcaldy. Thereafter, he attended the well-reputed University of Glasgow at the age of 14. He studied Moral Philosophy and cultivated his passion for free speech and liberty. Later, he attended Balliol College in Oxford to pursue his postgraduate studies.

Let’s draw some inspiration from the career and the great job that Adam Smith has done in his professional life!

The Wealth of Nations

Shortly after returning from France in 1776, Adam Smith published his magnum opus, The Wealth of Nations. It examines how human society evolved from the stage of hunter-gatherers without any property rights to a nomadic system of agriculture. The book ends by talking about how modern society was formed marked by the existence of free markets (laissez-faire) controlled by ‘invisible hands’.

The Wealth of Nations further gave rise to crucial ideas such as:

The development from land-based wealth to the wealth produced by assembly-line production led to the origin of the division of labor. The Father of Economics explained how effective the assembly line production was with the help of a pin. He emphasized that if 18 people completes a different segment of creating a pin, instead of one person doing it all alone, it will increase the labor productivity.

Prior to The Wealth of Nations, countries would evaluate their value and affluence by the gold and silver they owned. But, Smith was staunchly against the mere mention of mercantilism. He emphasized evaluating a country’s economic progress based on commerce and production.

Adam Smith was also a proponent of free exchange between nations in the form of import-export. This changed the mindset of people who were earlier hesitant to trade globally.

The Legacy left behind by the Father of Economics

Adam Smith not only enriched the world of academia with his mind-altering theories but also revolutionized the valuation system of world economies with his immensely effective concepts. He was well-read, way ahead of his time, and added much value to discourses like philosophy, economics, and history.

Adam Smith passed away in 1790, in Edinburgh, due to failing health. The world as we know it today is deeply indebted to the contributions made by Smith.

We are sure this life story instilled some much-needed motivation in you to work hard for your dreams and do good for society. If you want to know more about such personalities, you will definitely enjoy reading the stories of Sudha Murthy and Arundhati Roy.

If you have any more questions/suggestions, then feel free to drop a comment below or reach out to us!

Till then, keep learning!

Q1. Why is Adam Smith referred to as the Father of Modern Economics?

Answer- Adam Smith is known as the Father of Modern Economics for his pioneering work, The Wealth of Nations, highlighting novel concepts such as gross domestic product, free-market economy, and assembly line production.

Q2. What is the invisible hand?

Answer- The term invisible hand refers to the invisible market force that establishes balance in a free market economy by facilitating the demand and supply of goods smoothly. Adam Smith further went on to explain how zero government interference would lead to healthy competition between traders generating higher quality output.

Q3. According to Adam Smith, what should be the ideal role of a government?

Answer- In Adam Smith’s opinion, the ideal government should play a minimum role in a free market economy. However, it should have a well-defined function in other spheres such as administration, governance, defense, and distribution of public goods.

Tags :
Father of Economics
WRITTEN BY