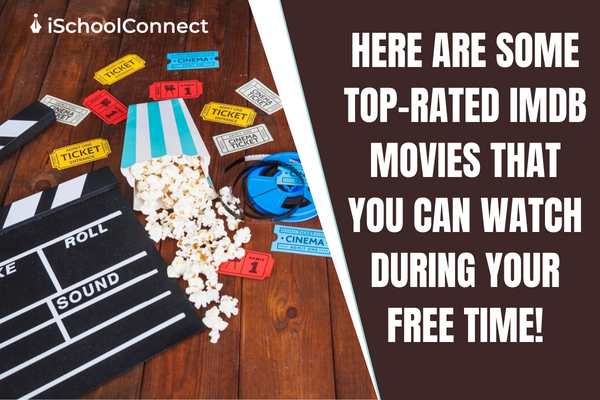 While internet popularity can be fickle and fleeting, a few films tower above their competitors and stand the test of time in the case of IMDb. Keep reading to find out the 7 IMDb top-rated movies.

Good movies, as finely crafted works of art, have always transcended generations and eras to leave an indelible impression on the audience. If you are a film buff with a keen eye for cinematic treasures, you have come to the right place because we have the masterpieces listed for you. According to IMDb, the following are the 7 IMDb top-rated movies of all time.

Andy Dufrense (Tim Robbins) ends up in Shawshank, one of the worst prisons in the state, after being imprisoned for a crime he claims he did not commit. Dufrense, not the type of man who can lead a prison life, befriends Ellis Boyd ‘Red’ Redding (Morgan Freeman), and the two men bond during their time inside together, finding solace and eventual redemption by maintaining their hope in a place where there appears to be none.

Shawshank Redemption is, without a doubt, a triumph. Frank Darabont directs the best of his Steven King adaptations, showing another side to the horror master in one of the best films ever about hope and the human spirit. The fantastic chemistry between Freeman and Robbins is the film’s foundation. The Shawshank Redemption is an excellent film, and it’s no surprise that it has 2.5 million ratings on IMDb.

Rarely does a film so wholly surpass the medium’s boundaries to become a cornerstone of popular culture, but The Godfather is an unusual confluence of factors. A genre thought to be extinct in Hollywood, a young, daring filmmaker with the vision to resurrect it and one of the most excellent casts of all time combine to bring this all-time classic to life.

It’s difficult to find flaws in this film; everything from the script to the production design, cinematography, pacing, action, and acting is excellent.

There have been numerous iterations and reboots of The Caped Crusader. While fans can argue endlessly about which actor is the best Batman and which movie depicts Gotham the best, there’s no denying that The Dark Knight is the ultimate Batman film. The film makes some odd choices that are completely uncharacteristic of Batman, such as Bruce Wayne operating in a brightly lit garage rather than a cave, and half of the film is set during the day. Some fans may argue that it is more of a Christopher Nolan film than a Batman film.

‘The Godfather, Part II,’ far from being a spinoff sequel to its 1972 predecessor, is an excellent epochal drama in its own right, serving as time bookends — the early twentieth century and the last two decades — to the earlier story. Al Pacino excels as Michael Corleone, the crime family’s new leader.

Francis Ford Coppola produced and directed the $15,000,000-plus production, which was about 2-1/2 times the original cost. Coppola also co-wrote the script with original book author Mario Puzo. The Paramount release has everything to be a huge box-office success.

Following the conclusion of the closing arguments in a murder trial, the jury of 12 must contemplate, with a guilty verdict resulting in the death of the accused, an inner-city teen. One juror (Henry Fonda) casts significant doubt on elements of the case as a dozen men try to reach a unanimous decision while sequestered in a room. Personal issues quickly surface, and conflict threatens to scupper the delicate process that will determine one boy’s fate.

It portrays the incredible true story of opportunistic businessman Oskar Schindler, whose efforts to make his fortune during WWII took an unlikely turn when he converted his factory into a refuge for Jews, saving over 1000 Polish Jews from death during the Holocaust.

The most remarkable aspect of this film is how completely Spielberg serves his story. The film is brilliantly performed, written, directed, and filmed. Individual scenes are works of art in art direction, cinematography, special effects, and crowd control.

The closer we get to Peter Jackson’s trilogy of films based on J.R.R. Tolkien’s seminal fantasy novels, the better it gets. The film concludes the nearly nine-hour story with Aragorn claiming his birthright as King of Gondor, possibly the most outstanding cavalry charge ever filmed, and the eventual destruction of the ring and defeat of the big bad, Sauron.

This film is in a three-way tie with Ben-Hur and Titanic for the most Oscar nominations, with all three receiving 11 awards.

Did you find this blog informative? Do let us know your thoughts and views in the comments below. Click here to contact us for more information on IMDb’s top-rated movies. We would be happy to oblige with your queries.

Liked this blog? Read next: Top 10 most popular Netflix movies

Answer- The House of Dragons is the most popular series on the IMDb 2022 list.

Q2. Which Indian film has the highest IMDb rating?

Answer- Rishab Shetty’s ‘Kantara’ becomes IMDb’s highest-rated Indian film. On IMDb, the film currently has a 9.4 rating, the highest for an Indian film.

Q3. Which is the top-rated Korean movie on IMDb?

Answer-  Decision to Leave is the top-rated Korean movie on IMDb. It currently has a 7.3 rating on IMDb.