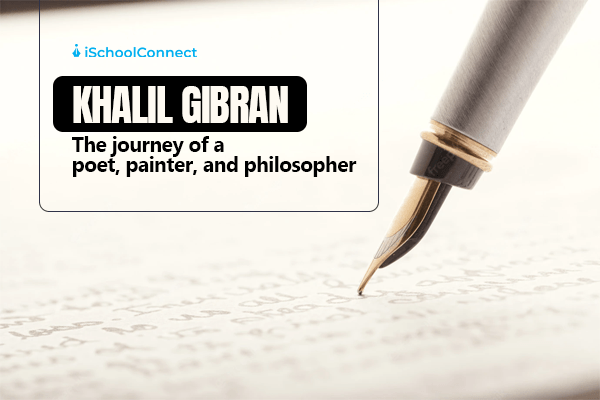 Kahlil Gibran is one of the world’s most underappreciated artists. He had a huge influence on society, particularly in counterculture groups. Keep reading this blog to uncover the eventful journey of Khalil Girbran.

Khalil Gibran was born in Besharri, Lebanon, on January 6, 1883, to Khalil Sa’ad Gibran and his wife, Kamila Rahme. Lebanon was a part of Syria and the Ottoman Turkish Empire at the time. As a youngster, he received no formal education because his family was poor. Priests regularly visited him, teaching him the Bible, Syriac, and Arabic. He had few privileges as a child growing up with no formal education. However, folklore and religious legends had a profound spiritual influence on him.

The Ottoman authorities stole his family’s possessions during his childhood when they imprisoned Khalil Gibran’s father for fraud and tax evasion. With no place to live, the Gibran family decided to follow in the footsteps of Gibran’s uncle and emigrate to the United States, departing for New York on June 25, 1895. In 1849, they liberated Khalil Gibran’s father, but he chose to remain in Lebanon.

The Gibran family moved to South Boston, Massachusetts, and shared an apartment with their relatives. In the school, a registration mistake altered his name forever, shortening it to Kahlil Gibran. It remained unchanged for the rest of his life despite repeated attempts at restoring his full name. In December 1896, a local art teacher spotted Gibran’s creative talent and arranged for him to meet photographer Fred Holland Day. After recognizing Gibran’s literary and artistic aptitude, Day called him a “natural genius” and became his mentor.

Gibran quickly began designing book illustrations, sketching portraits, and meeting Day’s friends. In 1898, he moved to Beirut, Lebanon, to attend Madrasat-al-Hikmah, a college where he studied Arabic literature and founded a literary journal.

When Gibran returned to Boston, he continued his artwork and rekindled his connection with Day. Gibran and another artist showed their work at Day’s studio in Boston in 1904. Here, Khalil Gibran met Mary Elizabeth Haskell, who became both his patron (supporter) and English instructor for the next two decades. She helped various brilliant and deserving people and was instrumental in Gibran’s development as an English writer and artist.

From 1908 to 1910, Haskell sponsored Gibran’s studies in painting and drawing in Paris, France. Before departing for France, he studied English literature with her, and the Arabic immigrant press published his essay “al-Musiqa” (1905) in New York City. Diverse influences, including Boston’s literary scene, English Romantic poets, mystic William Blake (1757–1827), and philosopher Nietzsche (1844–1900), affected Gibran’s aesthetic and literary career, as did his time in Lebanon.

They labeled Gibran a reformer with the release of his Arabic poem “Spirits Rebellious” in 1908. He quickly came to notoriety in the Arabic world. He rapidly became renowned as the most famous of the “Mahjar poets,” or immigrant Arabic authors. “The Procession” (1919) is one of the most well-known Khalil Gibran poems.

Gibran swiftly established himself in New York’s cultural and intellectual networks. His first English-language work, The Madman, was published in 1918. Three of Gibran’s images accompany the stories and poems on justice, freedom, and God.

The Prophet, published in October 1923 sold over 1,000 copies in 3 months. The tiny collection of parables, illustrated by Gibran, is one of America’s all-time best-sellers. By 1931, there were translations of the Prophet in 20 languages. In the 1960s, it reached new levels of appreciation among American college students.

Gibran experimented with a wide range of literary styles, including poetry, parables, bits of dialogue, short stories, fables, political essays, letters, and aphorisms. Between 1973 and 1993, he also released two plays in English and five plays in Arabic. However, three unfinished plays written in English at the end of Gibran’s life remain unpublished (The Banshee, The Last Unction, and The Hunchback or the Man Unseen).

In his writings, Gibran addresses “such issues as religion, justice, free choice, science, love, pleasure, the soul, the body, and death.” His works were em originality that broke with traditional forms, symbolism, an unwavering affection for his birthplace, and a sorrowful, melancholy, yet frequently oratorical manner.

Although in failing health, Gibran completed two more books in English. Those Khalil Gibran books were Sand, and Foam (1926) and Jesus, The Son of Man (1928). After his death, a compilation of his earlier essays was published, and several languages translated his Arabic work.

On April 10, 1931, Gibran was brought to St. Vincent’s Hospital in Manhattan, where he died the next day, aged 48 due to Cirrhosis, which he got via excessive alcohol consumption.

Gibran indicated a desire to be buried in Lebanon. His remains were briefly interred at Mount Benedict Cemetery in Boston before being transported to Providence, Rhode Island, and then to Lebanon on the ship Sinaia on July 23. In August, Gibran’s remains arrived in Bsharri, burying them in a nearby church.

Today, Scholars laud Gibran for infusing Western romanticism and a more free-flowing style into conservative Arabic poetry. His method, dubbed “Gibranism,” drew a large number of adherents. The young emigrant from Lebanon who arrived at Ellis Island in 1895 never became an American citizen since he was too attached to his birthplace. However, he was able to mix two cultures and acquire long-lasting renown in two quite distinct civilizations.

‘Faith is an oasis in the heart that will never be reached by the caravan of thinking. How can you sing if your mouth is filled with food? How shall your hand be raised in blessing if it is filled with gold?’

We hope you enjoyed reading this blog. In case of any doubts, you can reach out to us or drop a comment below and share your thoughts.

Answer – Although raised as a Maronite Christian, Gibran, being an Arab, affected not just his religion but also Islam, particularly the Sufi mysticism.

Q2. Where is the Khalil Gibran museum located?

Answer- The Gibran Museum, formerly the Monastery of Mar Sarkis, is a biographical museum in Bsharri, Lebanon, 120 kilometers from Beirut.

Answer– While the majority of Gibran’s early writings were in Arabic, the majority of his work released after 1918 was in English. For example, The Madman, Gibran’s debut novel, was published in 1918 by Alfred A. Knopf.