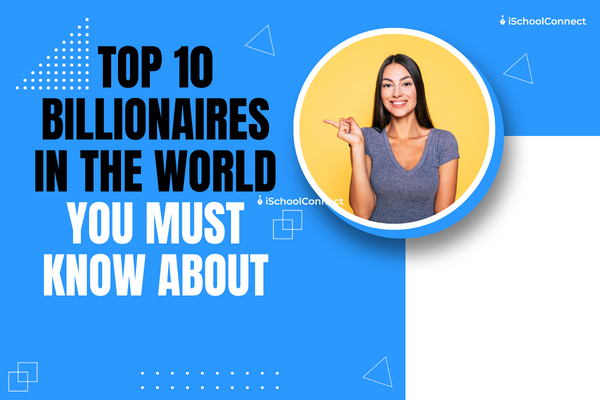 Top 10 billionaires in the world

Braving through the uncharted journey of revolutionary advancement, there are a select few individuals who have lived up to the challenge and, in the process, have accumulated an eye-watering amount of net worth. Keep reading to know more about Top 10 billionaires in the world!

Welcome to the world of rich and famous

With each passing year, new ideas and creative disruptions set the balance sheets of different corporations on fire. Its effects can be seen on the list of top 10 richest individuals, which undergoes revisions each year. Here’s a look at the top 10 billionaires for the year 2022.

Leading the line is the 51-year-old business magnate Elon Musk. Having been a visionary entrepreneur since 1995, Mr. Musk is amongst the most widely recognized people in the world. With his early ventures, such as Zip2 & PayPal, Elon Musk has consistently pushed the envelope towards advancement and visionary products. Today, he operates as the head honcho of Tesla, the most valuable car company in the world.

Calling the shots on some of the most elite brands on the planet, such as Christian Dior, Louis Vuitton, Sephora, TAG Heuer, and Givenchy is Mr. Bernard Arnolt. With his conglomerate that controls over 70 brands, the MHLV group is a force to be reckoned with. Having been at the group’s helm, Mr. Arnolt has, time & again, redefined his brands and kept them at the forefront of the luxury fashion scene.

In 1994, a married couple started an online bookstore called Amazon in a rented garage in Washington, USA. Twenty-eight years on, Amazon has become the “prime” destination for online shopping, OTT entertainment and cloud services. Regarding itself as “the most customer-centric company on the planet”, Amazon has consistently focusedon innovation and shaped the world as we know it today. At the helm of it has been Mr. Jeff Bezos.

The diversified Adani group, which has an interest in real estate, ports, airports, and cement among others, is led by the visionary Gautam Adani. Heserves as the President of Adani Foundation, the Corporate Social Responsibility Arm led by his wife, Ms. Priti Adani. Recently, the richest Indian has put a plan in motion to accelerate the valuation of the Adani Group to $1 Trillion.

A true visionary who has shaped the world of computing as we know it today is Mr. Bill Gates. Founded in 1975, he was at the helm as CEO of Microsoft till 2000. This coincides with the establishment of the Bill & Melinda Gates foundation in 2000. Mr. Gates has hence been heavily invested in his efforts towards climate change & education. He has been an inductee in the Forbes list of wealthiest individuals every year since 1987.

The “Oracle of Omaha” as he is affectionately called, Mr. Buffet, is amongst the most well-known investors in the world. His company, Berkshire Hathaway, is a huge conglomerate with big-namebrands such as Duracell under its belt. Having said to have purchased his first stock at the age of 11, Mr. Buffet has cemented himself as an institution in the domain of investing.

After about 37 years as the CEO of Oracle, Mr. Ellison stepped down and started serving as the CTO of the tech giant. Mr. Ellison also owns 35% of the firm. He also sits on the board of carmaker Tesla and holds approximately 15 million shares in the company.

The 2nd richest Indian on the list, Mr. Mukesh Ambani, has been the face of developing India. Having taken over the group from his father, the late Mr. Dhirubhai Ambani, Mr. Mukesh Ambani has taken Reliance to never-seen-before heights. The telecom revolution spurred by the introduction of Jio by Reliance has shaken up the entire telecom sector and has seen Jio bring in 420 Million subscribers.

The man who changed how we access the internet sits at number 9 on the list of the wealthiest individuals. He co-founded Google in 1998 and served as CEO of the tech giant until 2001. Mr. Page has also been a key investor in Planetary Resources, a space exploration company besides funding the development of a “flying car”.

Having stepped down as president of Google’s parent company, Alphabet, Mr. Brin remains a board member and a controlling shareholder of the search giant. Other interests of the 10th wealthiest man in the world include Space Adventures, a space tourism firm where Brin invested $4.5 Million in 2008.

Liked this blog? Read next: Top 10 richest men in the world

Q1. Which country has the highest number of billionaires?

Q2. Which industry are the richest people in?

Answer: More than 20% of the world’s billionaires were engaged in the Banking & Finance industry.

Q3. How is the net worth of an individual calculated?

Answer: Net worth takes a net calculation of assets owned by an individual minus all their liabilities and debts

Admin iSchoolConnect
Study Abroad Expert
`
What is a pixel? Everything you need to know about Top 10 richest countries in the world