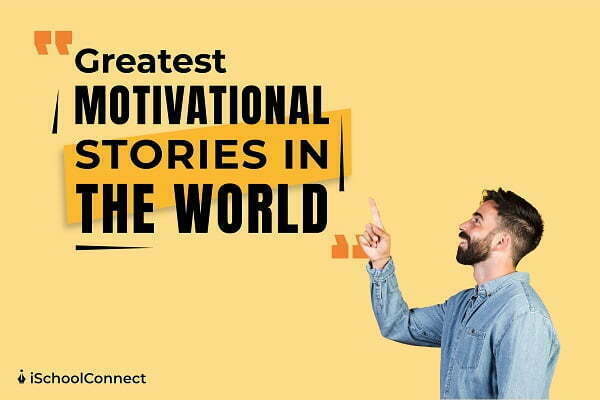 Top 5 motivational stories every student should know | Get inspired today!

Stories are meant to be told, yet some go unheard. They bring ideas into the world but also help us learn from someone else’s experience. You may find that you have a lot in common with these well-known faces. Here are 5 motivational stories that will change your life!

Motivational stories inspire you to never give up. Not everyone may know your story, but remember you have influenced people in your life, even if you are unaware of it. Your journey and lessons have allowed you to build relationships with other people. You’ve learned to connect, empathize, and grow each step of the way. The selected, well-known faces in this blog are only here to help you do that better.

If you’re not familiar with who Robin Williams is- he is an American actor and comedian. He has worked on masterpieces like Good Will Hunting, Dead Poets Society, and many more.

He may have grown up having a privileged life, but he missed out on a key aspect of childhood. His parents were never home, and they always left him with the family maid. He would entertain himself by creating silly voices and characters locked in his bedroom.

Through his jokes and putting on shows for his bullies in school, he made friends. He won an acting scholarship to the most prestigious school in the country.

While studying, he performed as a mime to earn money. He was depressed and desperate. One day, he found a flyer for a comedy workshop and turned up with no expectations. Standing alone on stage took him back to when he would entertain his bullies. Finally, he let out the silly voices, and the crowd loved him!

He is the ideal example of finding humor in the darkest of times, always making people laugh. He dedicated his life to making those around him always smile.

Robin Williams teaches us how empathy comes from a deep place of sadness. We can use that to empower others by just bringing a smile to their faces.

Life won’t always be positive; circumstances won’t allow you to smile. However, how you choose to react and the way you treat others and yourself can make or break your life.

Whether you love her or hate her, her story has inspired millions. J. K. Rowling is a British author, film producer, television producer, philanthropist, and screenwriter. She is one of the most successful authors of the century. She created a famous fantasy non-fiction series called Harry Potter.

It is because of her work that many of us can create an escape from this chaotic world. You may know the story of ‘the boy who lived’ but few know about the woman behind the story.

Joanne Rowling taught English in Portugal, was a single mother, and at one point she was on the verge of being homeless. In addition, she struggled with depression. She incorporated all the struggles she faced in the most brilliant ways throughout the Harry Potter series. From the failed relationship with her father to the death of her mother, each element of her life gave her an element to add to her book.

It took her five years from when she first thought of the idea of Harry Potter on the train to when she finished the first book. She turned all those dark and depressing moments in her life into something magical (pun intended).

You will always face problems in life. You can allow them to drown and consume you or get up and try to build something out of it.

He was raised by his grandmother after his parents split. He didn’t let those grievances affect him. His first job was in Tata Steel. He stayed, ate, worked, and slept with the workers. Soon, he was appointed as the Director-in-Charge of National Radio and Electronics Company Ltd. (Nelco) and built it up in a short span of time. However, because of the economic recession, the venture did not survive. This was his first failure, but that didn’t stop him from trying.

Despite being privileged, he stayed humble because of his journey. We see this in countless incidents throughout his life. Two of them that stand out to us-

First, he personally went to the houses of all the employees who suffered in the horrendous 26/11 Taj attack. He gave them compensation for their injuries and arranged for doctors and psychologists for those suffering. He also helped those who lost their loved ones through the attack by giving them the late employee’s lifetime salary, in addition to any compensation needed.

Second, he is a man of his word and never backs down from it. We see this when he attended a college event. He promised the students to meet them after the event was over. The event took longer than expected and he had a flight to catch. He canceled his flight just to meet with the students, as he had given them his word.

He talks about how leadership is not a position, it’s an action and also understands the importance of action and isn’t afraid to take risks.

You can build bridges and change the world when you have the will to do so. Things take time, and patience is the key. Master your skills and understand your power before you implement it.

Garrett Augustus Morgan Sr. was an African American inventor, community leader, and businessman. For an African American man, he achieved success that was not heard of during his era. He was always fascinated with how things worked, and his curiosity led him to Cincinnati, Ohio.

Here, he spent his life as an inventor, businessman, and political leader. He was best known for his three inventions-

He heroically created the gas mask to rescue trapped workers in a collapsed tunnel under Lake Erie. This was later used as a blueprint for the World War 1 gas mask. He was also the first African American to own an automobile.

In the 1920s, he started the Cleveland Collar, which became an important African-American newspaper in the nation. He was educated only in elementary school education and began his career as a sewing machine mechanic.

Jobs at several sewing machine factories caught his imagination. Through learning the inner workings of machines and how to fix them, he gained a patent for an improved sewing machine and opened his own repair business.

Even though he had limited education, he created things that helped millions around the world.

Knowledge should not be limited to your age. Keep an open mind to learn at every opportunity you get. Education is one way to gain knowledge and learn about the world. However, there are other means through which you can learn a lot – like others’ experiences, or practice.

Sophia Amoruso is an American businesswoman who was the former CEO of Nasty Gal and founder of GIRLBOSS. Growing up, she wasn’t a very happy kid. Doctors thought she had Tourette’s syndrome. Later, she was diagnosed with Attention Deficit Hyperactivity Disorder (ADHD) and depression.

However, none of this hindered her will. She opened a lemonade stand at 9 years and read many books about startups as a teenager. In addition, she dropped out of college but held a full-time job. By the age of 22, she had worked 10 different jobs.

She opened an eBay shop to work in her spare time and shipped her products with the tips she earned in photography class. Over time, she developed an eye for product selection. She got two Chanel jackets at a yard sale for $8 and sold them on eBay for $3000.

Later on, she built her own site and sold her products from there. Her company was doing well, and she was on the Forbes 30 under 30 list. Of course, things couldn’t always be smooth, since she lacked the management skills to run the company, and things took a turn for the worse. The company entered bankruptcy proceedings; lawsuits followed. Hence, she resigned as the CEO but kept a senior executive post.

Despite all these downfalls, she didn’t let her situation dampen her spirits. She published her autobiography titled #GIRLBOSS. The book was on the New York Times bestseller list for 18 weeks straight!

Her story has many more twists and turns, but they all tell us the same thing. Never give up.

Success can sometimes get to your head, and you may lose your way. It’s important to prioritize your goals and learn who you are. Building your own identity in a world where people love putting tags is difficult. When you know and understand your strengths and weaknesses, those tags will not affect you negatively.

The reason these people are on this list is that they are famous and we know their stories. Do you want your story to be told? What actions will you take to make this happen?

Let us know in the comments section below! We are eager to hear your thoughts.

To understand your goals and passions, you must take steps. iSchoolConnect is here to help you do just that.

1. What are the 3 types of motivation?

Answer- The three types of motivation are-

2. What is the strongest motivation?

Answer- One of the strongest forms of motivation is hunger. This is due to evolution.

3. How can I motivate myself every day?

Answer- Since everyone is different, there is no one straight answer for this. Trial and error are the best way to understand what works for you. To motivate yourself every day you can-

Samantha Andrade
Study Abroad Expert
`
How to concentrate on studies | 12 absolute tips for you! Top 10 must-watch motivational movies for students