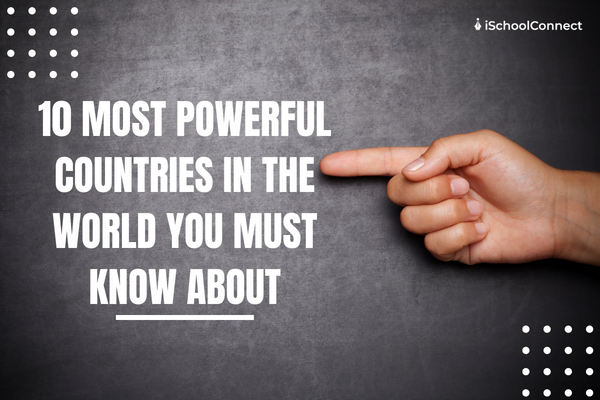 World’s top 10 powerful countries | some exciting facts about them.

We are aware of the world leaders’ love for power. These top 10 powerful countries lead the world and people’s minds. Read on to learn some interesting facts about them.

Every leading nation is fighting for one thing, power. Every world leader wants to have the power to dominate, influence, and drive the world according to their wish. With this ambition, they work towards making their nation the most powerful. Here is the list of the top 10 powerful countries worldwide

Top 10 powerful countries in the world

Powerful nations are those who dominate the world’s economic and political flow. They have the highest GDP and growth rate, the strongest military forces, technological advancements, and strong international alliances. You can see their dominance through the news and current affairs.

This article will go through some interesting facts about these powerful countries. So, let’s get started.

This North American country has maintained the position of a superpower nation for decades. The United States is the number one most powerful country in the world. Its capital is Washington, DC. The country has the highest GDP of $23 trillion.

The United States is also known as the USA. It has 50 states and a population of 331,893,745. It has a strong social and cultural influence over other countries. Its cultural imprints are spanned across the world due to television shows, movies, music, and art.

The second most powerful country is China. Its capital is Beijing. It has a GDP of $17.7 trillion. It is also the most populous country in the world, with a population of 1.4 billion. China is one of the largest countries on the Asian continent.

China is more than just a superpower. It is one of the oldest civilizations in the world. It has one of the oldest languages. It is known as the People’s Republic of China. The communist party has been ruling the country since 1949. Its economy is growing speedily, making it a worthy competitor with the United States.

It is one of the largest countries in the world. Russia covers the whole of northern Asia and most of the eastern part of Europe. It shares sea borders with Japan and the United States.

Russia was a part of the Soviet Union formed in 1922. In 1991, this union collapsed, and Russia became independent. Russian citizens directly elect their president.

The third most powerful country in the world is Germany. Its capital is Berlin. It has a GDP of $4.22 trillion. The country is the most populous country in Europe. Its population is over 83 million. It locates in the central part of the European continent.

Germany shares borders with 9 countries. It has landscapes with northern plains, Baltic seas, bavarian alps, etc. The German language is one of the oldest languages in the world. It has a parliamentary democracy. It is one of the most desirable countries to work in. That’s why it possesses the highest number of skilled workers.

This royal country holds a great impact on the European Union. The United Kingdom or the UK includes the island of Great Britain. This island contains England, Scotland, and Whales. Its capital is London.

The United Kingdom has a GDP of $3.19 trillion. The royal family of England rules this country. It has a great impact on international economic, political, scientific, and cultural happenings.

Read more: 7-step guide to choosing the best country in the world for studying abroad

The country driving the whole world crazy with its music and television shows is also one of the most powerful countries. South Korea is officially called the Republic of Korea. It is located in the eastern part of the Asian continent. It occupies the southern part of the Korean Peninsula.

South Korea also has the strongest economy. Its GDP is $1.80 trillion. The country has democracy. It gained independence from Japan in 1945.

The most fashionable country in the world is also the most powerful country. France is located in western Europe. It is also one of the oldest countries in the world. It has a strong influence on the world’s cultural and social advancements.

Paris is the capital of France. It has a GDP of $2.94 trillion. It is the top exporter of defense mechanisms in the world. The World Bank has declared France as a wealthy and high-income country.

The country of the rising sun truly proved its power over the world on several occasions. Japan is the world’s most literate country and the most technologically advanced. It is made of four islands. The country is located in the eastern part of Asia.

Japan has a GDP of $4.94 trillion. It is one of the strongest economies in the world. It has the best education system. It also has the longest-living humans. The country effectively blends with the modern lifestyle and ancient traditions.

The United Arab Emirates, or UAE, is a federation of seven emirates. It is located in the middle east. It is at the eastern end of the Arabian peninsula. It shares borders with Oman and Saudi Arabia.

Abu Dhabi is the capital of this country. It has a GDP of $359 billion. It is a top exporter of oil. Before the discovery of oil, its economy was based on fishing and the pearl industry.

Jerusalem is the capital of Israel. It has a GDP of $482 billion. It gained independence in 1948. Since then, it has been in constant war with its Arab neighbors.

Liked this blog? Read next: UK vs US education | Which country is the right fit for you

Q1. Which country is expected to be the most powerful in the year 2050?

Answer: It is predicted that China will lead the world in 2050, followed by India and Indonesia.

Q2. Which country has the number one army?

Answer: The United States has the number one army in the world.

Q3. Which country has won the most wars?

Answer: France has won 1,115 wars which is the most in the world.