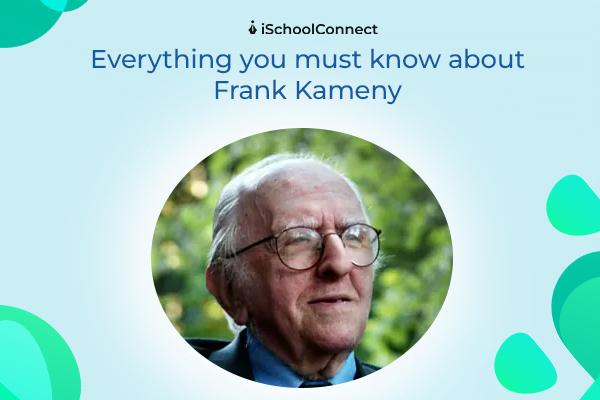 Frank Kameny | Know everything about the life and work of Frank!

Frank Kameny is the pioneer of the LGBTQ+ movement in the USA. He dedicated his life to social rights for this marginalized community and eradicated the stigma by educating people. Do you know other details of his life? Let’s read.

Welcome to the world of Frank Kameny | An inspiration to many!

Imagine you were outside a movie theater. Just as you were about to enter the hall, you were prevented from doing so because you were identified as a member of the LGBTQ+ community. Instead of being granted the right to enter, you were then physically thrown out from the theater gates and were spit upon.

In the 21st century, such a scenario is simply unacceptable or at least unimaginable. However, it was not so for Mr. Frank Kameny, ex-astronomer and Ph.D. holder from Harvard. Who was he? Well, that’s exactly what you’ll find out below.

Born on the 21st of May, 1925 to Mr. and Mrs. Kameny, Franklin Edward Kameny was a gifted youngster. It was at the age of six, when most kids simply enjoy running about and playing, that he was aware of his passion, namely astronomy. He was enrolled in the Richmond Hill School.

The years quickly slipped by, with Frank Kameny’s school yearbook mentioning his various honors, such as winning something called the ‘Scholarship Pin’ 5 times, and other distinctions such as being the President of his school’s Astronomy Club, etc. and so on.

He was also part of various clubs and associations such as the Biology Club, Domino Club, Council of Nations, etc. The school yearbook describes his intellect in the following words, “The glory of a firm, capricious mind.”

After graduating from school, he saw action in Europe during the Second World War, where he served his country with distinction. The following years saw him as a student at Queens College and later Harvard, where he completed his Ph.D.

A hard worker with a brilliant mind, he graduated from Harvard with a master’s degree and a doctorate in the field of astronomy.

He began his professional life as a part of the Army Map Service of the DOD, where he rendered his skills as an astronomer. However, a few months later, he was fired from his job on the grounds of his sexual orientation due to something that took place in Lafayette Park.

Angered and hurt by his dismissal, Frank Kameny never returned to his professional field but became a lifetime activist for LGBTQ+ (Lesbian, Gay, Bi-sexual, Trans, Queer, Plus) community.

When Frank Kameny began seeking change for the LGBTQ community

He was the first person at the time to openly challenge his dismissal on the grounds of his sexual orientation and legally petitioned all the courts till the Supreme Court overturned his petition.

From the 1960s onwards, he began campaigns for the inclusion of members of the LGBTQ+ into the daily lives of the people outside the White House. In 1961, he took his first concrete steps to fight the phobia (known as the Lavender Scare during that period) by co-founding the Washington D.C chapter of the Mattachine Society and the East Coast Homophile Organization (E.C.H.O) in 1963; these organizations stand to this day and continue to battle the stigma faced by the community.

Frank Kameny continued to battle for the basic rights of the LGBTQ+ community in various ways, such as-

Finally, two years later, the US Civil Services Commission overturned its decision regarding the ban on LGBTQ+ employees in 1975.

Even though initially they were not successful, they bore fruit later on.

Frank Kameny was also remarkable as he campaigned not only for his case but also for the cases of countless other people who were facing the short end of the stick due to their orientation.

Though the court cases did not often rule in their favor, Frank’s efforts ensured that they received justice.

When Frank Kameny was finally acknowledged

The years rolled swiftly by, when in 2009, more than 50 years after his unfair dismissal, Frank Edward Kameny received an official apology from the US Government.

After having lived a life rife with great struggle and even greater triumphs, Frank Kameny passed away on the 11th of October, 2011, a date known as the National Coming Out Day.

Thus, Franklin Edward Kameny can be described as a man who was a true revolutionary, fighting for the basic dignity of a large group of people who faced discrimination at every turn.

A brief timeline of the life of Franklin Edward Kameny

Was this blog informative? If so, please share your thoughts in the comments below. Click here to reach out to us for more information about Frank Kameny. We would be happy to assist you with your queries!

Q1. Who was Frank Kameny?

Answer – One of the foremost champions of LGBTQ+ rights and the first person to openly campaign for the same.

Q2. When was homosexuality’s definition by American Psychiatric Association overturned?

Answer – The definition of homosexuality by the American Psychiatric Association was overturned in 1973.

Q3. What notable organizations were founded by Frank Kameny?

Answer – The notable organizations founded by Frank Kameny were the Washington D.C chapter of the Mattachine Society and the East Coast Homophile Organization (E.C.H.O) in 1961 and 1963, respectively.