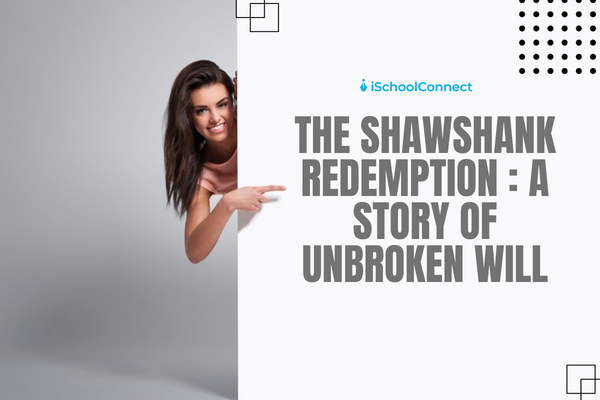 A gripping drama that reminds us that hope is a valuable and resilient emotion that can give our lives substance and meaning. The Shawshank Redemption movie review will tempt you to watch the film.

The Shawshank Redemption is more than just a story of redemption.

Yes, it is, but in spades. However, it is also a story about clinging to who you are. If you’ve ever wondered who you are, it’s never too late to find out. Perform some in-depth soul searching. Make yourself the best version of yourself. It’s entirely possible. Keep reading The Shawshank Redemption movie review to learn more about the film and its message.

Twenty-six years after its release, The Shawshank Redemption remains at the top of IMDb’s list of the top 1000 movies. It makes the film inarguably unmissable and well worth seeing; however, there is more to it.

Andy Dufrense, a banker, is wrongfully sentenced to prison for the murders of his wife and her lover. Andy spends the next 19 years of his life enduring the hardships of prison life and developing a beautiful friendship with another inmate, Red. Unlike many films that rely on spectacle and action, The Shawshank Redemption offers emotionally charged conversations and a well-developed look at humane emotion.

The drama is neither experimental nor daring, but the smooth plot flow brings the audience a strange satisfaction upon viewing.

The Shawshank Redemption is not a personal film, but it impacts viewers. Even though most of our daily hassles and roadblocks are nowhere near as tricky as Andy’s, everyone notices an undeniable connection with the protagonist.

We all share the human experience of dealing with dilemmas, constantly battling unjust treatment, and struggling to find resilience and our way of life through various themes and problems. Andy’s story begins with his arrival at Shawshank State Penitentiary and ends with his release. It no longer matters whether the man’s sentence was unjust or undeserved; instead, how he handles obstacles defines him as a strong person.

About Andy and Red

Andy and Red are two characters with opposing perspectives on their situation. What people find remarkable about the film is how the bond between these two souls keeps their hope alive forever. The views of a senior convict and a newcomer appear to balance, and their friendship eventually helps the men redeem themselves.

The protagonist’s inner strength cannot help but captivate the audience. While Morgan Freeman’s performance as Ellis Redding deserves all of the credit, Tim Robbins’ portrayal of Andy Dufresne is also outstanding. He was able to portray a subtle, introverted, yet powerful and charming character with a piercing intelligent gaze.

Andy’s inner strength is undeniable, as evidenced by his persistence in achieving his goals. Andy is consistent and calm, whether stocking the prison library with books or carrying out his escape plan. His bravery enables him to pursue his dream and leave the prison without becoming institutionalized and repeating Brooks’ tragic fate.

Furthermore, two friends find redemption when Red joins Andy in Mexico after carving his name next to Brooks and leaving the house for good. Both men decide to ‘get busy living,’ and this message inspires the audience and gives them a sense of completion and satisfaction after watching.

Three reasons to watch this movie

Here are three reasons to persuade you to watch this film.

1. Face the past and move on

It’s a good time to do some soul-searching, and that will not take us to a place where the past does not exist.

Andy learns and confronts his guilt. He did not murder his wife but blamed himself for her death. In this way, Andy was already living in a prison of his design. Later, in a real jail, he learns to express himself.

Red and Andy both instruct each other. Red learns about what is possible for him. He gives up trying to be who society wants him to be. He’s honest and open, but unlike Andy, he doesn’t have high expectations.

He’s scared and has given up. He’s not optimistic. It’s not easy for Red, terrified of failing to make it on the outside. He couldn’t before, but now he can. After the parole hearing, Red says what he feels is correct.

Learning to confront and let go of the past is what gives him genuine hope for the future for the first time in a long time.

2. Always hold on to hope

Andy received two weeks in the hole (solitary confinement) for playing music, but he felt it was worth it. “I had music in there,” he tells Red. He taps his head as well as his heart.

You must hold on to hope, even if it means going through a difficult period. “Remember Red, hope is a good thing. Maybe the best of things. And, no good thing ever dies.” Andy says not once but twice, maybe three times throughout the movie.

Andy never gave up hope. Yes, he went through a lot of bad stuff, but ultimately, he had his freedom. Similarly, we must hold on to hope and wish for the best.

The Shawshank Redemption portrays a pure friendship between Andy and Red. The movie moves you in terms of emotions, the message, and, most importantly, the bond between them. It’s a film that makes you blive in real friends and the lengths they can go to for their friendship.

Did you find this blog informative? If so, do express your thoughts in the comments below. Click here to contact us for more information on The Shawshank Redemption. We would be happy to assist you with your queries.

Liked this blog? Read next: Top 10 YouTubers in India

Q1. Is The Shawshank Redemption a real story?

Q2. What does the word Shawshank mean?

Answer- The term ‘Shawshank’ means being in a situation from which you cannot escape, either by yourself or with the help of others.