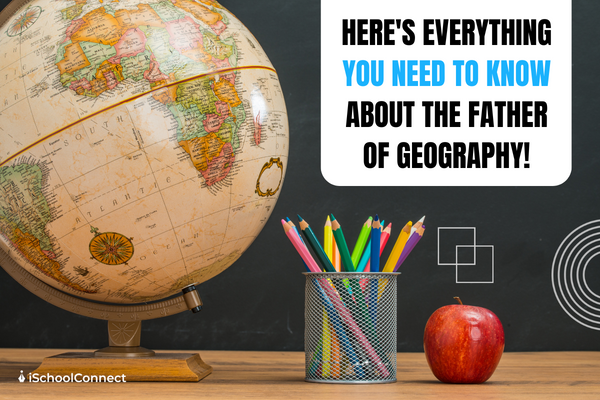 Who is the father of geography and how was it invented?

The title ‘Father of Geography’ is given to the inventor who coined the term ‘geography’ and conducted essential research in the field. The term geography is derived from the Greek word ‘Geographika.’ As a result, geography is seen as a science that investigates the Earth and its physical properties. In this blog, you will find the answer to who is the father of geography and how it was invented.

Who is the Father of Geography?

‘Eratosthenes of Cyrene’ is renowned as the ‘Father of Geography’ as he is credited with coining the term ‘geography.’ This astronomer and mathematician was born in 276 BC in Ancient Greece. As the head of the Great Library during the reign of Pharaoh Ptolemy III, he wrote a three-volume series called Geographika.

Read more: How geography quiz can help you develop your general knowledge

These are the branches of physical geography

Who is the father of geography?

The Conclusions of Eratosthenes

Listed below is some more scientists and geographers who are regarded as the fathers of geography, according to various fields of geography.

Did you find this blog informative? If so, please share your thoughts in the comments section below. Click here to contact us for more information on who is the father of geography. We would be happy to assist you with your queries.

Liked this blog? Read next: Things you must know about the study of the earth!

Q1. Who had calculated the radius of the earth for the first time?

Ans-Eratosthenes calculated the radius of the earth for the first time.

Q2. Who is considered the father of social geography?

Ans-The word ‘social geography’ was first used in the Anglo-American tradition by George Wilson Hoke, whose work ‘The Study of Social Geography’ was published in 1907, but there is little evidence that it had any academic impact.

Q3. Who is the father of physical geography?

Ans-Alexander von Humboldt is regarded as the father of physical geography.

Admin iSchoolConnect
Study Abroad Expert
`
Who is the father of chemistry? How to convert SGPA to CGPA