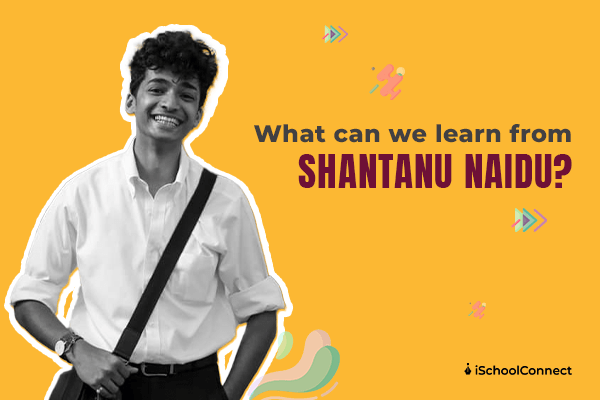 Are you wondering who Ratan Tata refers to as his millennial friend? If yes, here’s everything you need to know about Shantanu Naidu. He is not only Ratan Tatas’ general manager but also his assistant. Keep scrolling to learn all about him!

A social activist, animal lover, author, and young entrepreneur, Shantanu Naidu is a popular and inspiring millennial. He is not only the general manager at Ratan Tata’s office, but people also refer to him as Tata’s assistant.

Ratan Tata has referred to Shantanu Naidu as his millennial friend. There are multiple photos of both of them indulging in a discussion and celebrating different occasions. Shantanu has become a sort of role model who has brought a positive change in society by describing a new meaning of life.

If you want to know more about Shantanu Naidu, then keep on reading to unleash a horde of information about the young man destined to make it big as a good Samaritan.

Who is Shantanu Naidu?

Born into a Telugu family in Pune in 1993, Shantanu Naidu has always been a bit different from people his age. At 28 years of age, the young man has made himself a prominent personality in the world of business. He has been a young achiever of sorts and has always had a sensitive side about him. He cares for other people and even the animals around him.

His achievements are commendable and worth talking about. He was part of a student organization called Motopaws (of which he was the founder) that used to help street dogs lead a good life. Therefore, when he noticed that running cars would hit street dogs, mowing them to death, it gave him the idea to build denim collars with reflectors to save them from such a plight. Subsequently, as a result of this step, Naidu saved many dogs.

When Naidu wrote about this incident and the precautionary measure taken by his organization, it caught the eye of the baron of the Tata Group, Ratan Tata.

Ratan Tata is also known to be an animal activist, so he sent a newsletter inviting him to Mumbai. After a meeting, the octogenarian and the young activist realized they share common aspirations. They started meeting often and consulting each other on various matters, including social issues.

Now Shantanu has gained a prominent position in the company. If reports are to be believed, Shantanu Naidu gives business tips to the head of Tata Industries for investing in new-age start-ups.

But Shantanu’s achievements are not limited to such discussions with Ratan Tata. He is also an entrepreneur, social media influencer, and author with Harper Collins (he has written and published the book, “I came upon a lighthouse”).

Although much is not known about his early life education, Shantanu Naidu has graduated from Savitribai Phule, Pune University, with a mechanical engineering degree. His educational aspirations did not end there. He also went on to do an MBA from Cornell University in 2016. Needless to say, the young achiever set a mark for himself by winning various awards at this US university. His list of achievements at Cornell are listed below-

This impeccable man is certainly gifted and has made himself a role model for young students.

Shantanu Naidu’s salary and net worth

Shantanu Naidu’s career journey motivates all youngsters to work harder to reach the highest levels of success. He has always been more of an over-achiever when it comes to his career. Most of his work profile includes social work. We have already mentioned that the Tata Group had employed him, but that is not all.

On his Instagram handle – On Your Sparks, Shantanu Naidu motivates students globally about entrepreneurship. He started this handle when the Covid-19 lockdown began to express the lessons he had learned in his life. He has converted these life lessons into entrepreneurial wisdom.

Additionally, he gives online lectures in the live sessions every Sunday on his Instagram account and charges Rs 500 as fees from each attendee. These funds go to Motopaws NGO, which helps street dogs lead better lives. Today, his organization, Motopaws, has spread over 20 cities and 4 countries.

According to various media portals, since his salary is not disclosed, the amount may not be an accurate figure. Besides a regular salary, he might also be receiving other compensations from the Tata Group. Moreover, he has a net worth of Rs 5-6 crores because of his organization and online talks.

Goodfellow’s is an upcoming start-up that Shantanu himself has founded. This app acts as a platform where elderly citizens get a chance to connect with young minds. This application aims to extend assistance to senior citizens who struggle to complete their day-to-day activities, like buying groceries and medicines and visiting doctors.

This is also an excellent opportunity for young kids to learn from experienced individuals about different facets of life.

We have already mentioned earlier that Shantanu Naidu is an author with Harper Collins. He has written and published the book” I came upon a lighthouse.” In this book, he has written extensively about his friendship with the octogenarian Ratan Tata. He talks all about what he does with Tata when they both gel over something. It shows Ratan Tata in a different light than what the world sees him as – a successful businessperson. It is a charming character sketch of Tata from the perspective of Shantanu.

We hope you enjoyed reading this blog! In case of any queries, reach out to us or drop a comment below!

Liked this blog? Read next: Kiran Bedi | 5 amazing things to know about this lady!

Answer- Currently, Shantanu Naidu has been the general manager at Ratan Tata’s office since July 2018.

Q2. Why is Shantanu Naidu a good role model for youngsters?

Answer- Shantanu has done a lot of good work in the past and has continued to do so. He is a role model for people who wish to do something for society, irrespective of how big or small the service is. His empathy is inspiring and teaches people to have a kinder outlook towards life.

Q3. What are the exemplary qualities of Shantanu Naidu?

Answer- Shantanu Naidu is known for his compassionate and innovative outlook on life. He has persevered a lot in saving dogs. Along with that, he also takes care of the elderly who are lonely or abandoned and developed an app for them where young volunteers up to the age of 30 looks after such individuals. This shows that he respects all types of lives.